Cats are very territorial animals and will fight with other cats to establish territory or to defend existing territory. As a result, fight wounds are common in cats. These wounds frequently result in an infection that can be quite debilitating, especially if left untreated. 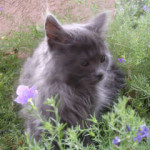 The bacteria that are trapped under the skin following a bite wound can multiply for several days before any signs of infection become apparent. Swelling and pain at the puncture site are the most common signs of infection; many times, the cat will also run a fever. If loose skin is present around the puncture sites, a pocket of pus will form an abscess. If the skin is not loose, such as on a foot or the tail, infection spreads throughout the tissues, but the swelling may be less apparent than with an abscess. This type of infection is called cellulitis. With both an abscess and cellulitis, trapped pus can made the cat quite toxic and extremely ill.

The most frequent sites for bite wounds are the face, legs, back, tail and over the rump.

When a dog inflicts a bite, it clamps its teeth shut in the skin, and shakes its head. Usually the skin of the victim tears, leaving a large laceration. However, when a cat bites, its teeth go through the skin, and then it releases quickly. This results in small puncture wounds in the skin, with holes about the same diameter as the cat’s teeth. These holes seal and virtually disappear within hours, trapping bacteria from the cat’s mouth under the skin of the victim. The type of bacteria which live in the cat’s mouth thrive in an environment where the oxygen concentration is low. Once the wound seals shut, bacteria can begin to multiply at a rapid rate.

The organisms most commonly involved with cat bites are Pasteurella multocida and Streptococcus; as previously stated, bacteria which can survive with little or no oxygen are often involved.

The diagnosis of a bite wound is usually straightforward. Occasionally, the cat is presented to the veterinarian before the abscess or cellulitis is apparent. Usually, a diligent search will reveal the presence of punctures in the skin.

Treatment of cat bite wounds varies. If you know that your cat has bite wounds from a fight, antibiotics given within 24 hours will usually stop spread of the infection and prevent the development of an abscess. If several days have elapsed since the fight, an abscess will usually form. The abscess must be drained through the bite wound holes or by incising the skin over the abscess. Occasionally, a latex drain tube must be placed to keep the wound open and allow pus to drain out completely.

Antibiotics given by injection and/or by mouth complete the treatment. The abscess usually heals within 2-5 days. If cellulitis occurs instead of an abscess, drainage is not possible because the infection is not confined to a local area. In this case, antibiotics are the sole treatment. Cellulitis is slower to heal than an abscess but will usually take place within 3-7 days.

Bite wounds which receive proper veterinary care usually heal without complication If a bite wound infection does not heal within a few days, it often becomes necessary to look for an underlying cause. Certain viruses, including the feline leukemia virus and the feline immunodeficiency virus, suppress the immune system and complicate the cat’s recovery from infections. A blood test should be performed for the leukemia virus and the feline immunodeficiency virus; if these are negative, other tests may be needed to look for possible explanations.

Additionally, there are some long-term considerations related to bite wounds of which you should be aware. Bite wounds are one of the main routes of transmitting the feline leukemia virus and the feline immunodeficiency virus between cats. Because these viruses are found in large amounts in the saliva of infected cats, bite wounds from these cats are literally injections of virus.

When a cat has a fight wound infection and has not been vaccinated against feline leukemia virus, it is usually recommended to test the cat for the presence of the virus. It will take at least 3 weeks before the leukemia virus infection is advanced enough to be detected. The test should be performed at that time. If the test is negative, you should vaccinate your cat against the virus.

Unlike the leukemia virus, the feline immunodeficiency virus is not preventable with a vaccine. Also, because of an extended incubation period, the test for this virus may not become positive for many months, or even years. Therefore, testing in 3 weeks is not likely to be meaningful. However, if your cat has been in other fights, testing for this virus could detect an infection that began months earlier.

Should you come in contact with draining pus, thoroughly washing your skin should be sufficient. The bacterial organisms in a feline bite wound are potentially infectious to humans if there should be an open wound on the owner’s skin. Generally, the risk is minimal.

Whenever a human is bitten by an animal, a physician should be contacted immediately.

Neutering of the male cat can make a difference in decreasing or eliminating the problem of bite wounds. Neutered male cats may defend their pre-existing territory, but usually do not seek to expand the borders of their territory. Neutered cats seem content to claim a small area around or within their home. If their territory is invaded by another cat, however, they will defend it by fighting. Female cats, whether intact or spayed, will also defend their territory. 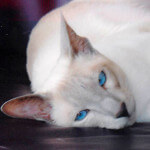 Keeping cats indoors and away from other cats can also help in management of this problem.